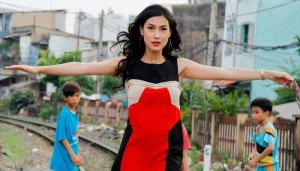 Funny, super smart and thankfully, unpredictable. This tagline should be on the poster of the romantic comedy, “How to Fight in Six Inch Heels,” directed by Ham Tran. I had a chance to work with Tran on a project in 2006, the same year his film, “Journey From the Fall,” showed at the Hawaii International Film Festival. Back then, I would never have guessed that he’d work on a fashion romantic comedy, but we should all be so glad he did.

Kathy Uyen, who is an undeniable triple-threat in the industry, produced, co-wrote and starred in this film. The story begins in New York, where Anne (Uyen), a Type A, ambitious and rigidly organized budding fashion designer seems to have it all, and all planned out in two year spans — engaged for two years, career success two years later, than a baby two years after that. But fate has different plans when her fiance, Kiet (Petey Majik Nguyen), a Vietnamese businessman, breaks the news that he got a promotion, but has to spend three months working in Saigon.

While the pair are on video chat, trying to keep the fires of the relationship burning while long distance, Kiet accidentally falls and his laptop reveals a pair of high heels on his hotel room floor. Anne begins to cyberstalk Kiet, convinced he’s dating one of the supermodels he’s been photographed with and intent on tracking him down in person.

Once she gets to Vietnam, the movie picks up steam and her friend, Danny (Don Nguyen), a fabulous stylist and my favorite character, helps her to infiltrate the world of supermodels and fashion in Saigon. In the spirit of “The Devil Wears Prada,” there is an epic makeover montage, with shopping, make-up and the works. Danny teaches, and even tortures Anne into mastering the art of walking in six-inch heels, striking a pose, and even what not to eat.

There’s a good balance of laughter, light intrigue and sweet moments in this film, so you don’t have to be a fan of haute couture to appreciate it. Oh but if you are, you’ll be in fashion heaven.